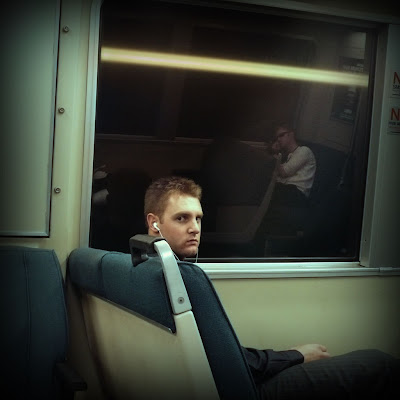 Henri Cartier-Bresson, shown here in a 1992 photograph by his wife Martine Franck, didn't like posed portraiture; he detested them. He said he would infinitely prefer to look at ID pictures displayed outside passport photo studios than look at a contrived portrait. "At least there is on these faces something that raises a question, a simple factual testimony."

Cartier-Bresson retired from doing reportage in 1970, but continued to take portraits of people he admired. He shot his portraits the same way he shot pictures on the street: quickly, discreetly, unobserved, without artifice. He avoided posing his subjects as much as possible, even the ones that he shot for magazine assignments. When asked to photograph Frederic and Irène Joliot-Curie in 1944, he shot their picture as soon as they opened the door. "It wasn't very polite," Cartier-Bresson said, but the piercing gazes of the Curies with their hands clasped naturally against their bodies could not have been captured any other way.

Cartier-Bresson described his shooting style as a "quick bite of a mosquito." But for Truman Capote, whom he photographed in 1947, he was a dragonfly, "a frantic dragonfly ... Leica glued to his eye ... doing his clickety-clicks with a joyous intensity and religious fervor that filled his whole being."

His frenetic approach usually meant getting the business of shooting done as quickly as possible: "A portrait is like a courtesy visit of fifteen or twenty minutes. You can't disturb people longer than that..." He preferred to spend the rest of the time enjoying the company of his subjects. Or their silences. Of his visit to Matisse in 1944, he said: "I sat in a corner and didn't move; we didn't speak to each other. It was as if we didn't exist." His 1971 meeting with Ezra Pound in Venice was equally wordless, a long silence "that seemed to last for hours."

Cartier-Bresson had an aversion to photographing actors because their professional instinct is to pose for the camera. These portraits of Marilyn Monroe (1960) and French actress Isabelle Huppert (1994) are notable exceptions. Monroe was photographed on the set of the 1961 film The Misfits. Huppert, on the other hand, was a favorite of Cartier-Bresson's: "I was aware that he saw something in me that I didn't reconize," she said. "He seizes a moment that is captured by a movement; that's why he's right to do things quickly."

In the age of elaborately manufactured image-making, Cartier-Bresson's portraits may appear unremarkable for their lack of high-concept artistry. His portraits of Jean-Paul Sartre (1946) and Simone de Beauvoir (1947), lovers and twin pillars of French existential philosophy, are mere snapshots; Albert Camus' 1945 portrait is slightly out of focus.

Cartier-Bresson will not dispute this; he does not care for image-making or deliberateness. "Above all, I look for inner silence," he said. "I seek to translate the personality and not the expression."

Drawing, not photography, was the first love of Cartier-Bresson. In the course of his career, he photographed the greatest painters and sculptors of his time, artists whom he admired. Comparing photography and drawing, he said that "If in making a portrait, you hope to capture the inner silence of a willing victim ... with a pencil portrait, it is the draughtsman who must possess an inner silence."